CAMPUS—As she begins her last fall semester, Mary Sue Coleman tweeted that she is “excited but kinda freaking out” about ending this chapter in her life. The eleventh-year senior first became a Wolverine in the fall of 2002 and has been heavily involved in campus activities ever since.

“Everyone always says that college flies by, but wow! What have I been doing for the last eleven years?” said Coleman, who assumed several leadership roles and raised over 3.2 billion dollars for the University. “Can we go back to freshman year, please?”

During her time at the ‘U’ Coleman worked with President Obama, received a lifetime achievement award, and was featured in Time magazine.

Said Coleman, “That was so much fun, but now I guess it’s time for the real world. I’m so nervous!”

For now, those close to Coleman say she plans to enjoy the time she has left by showing her support at football games, holding press conferences, and throwing huge house parties with her roommates at South U. and Tappan.

“Before I move on, I’m ready to make senior year the best yet!” said Coleman, also adding that she will “always be a Wolverine.” 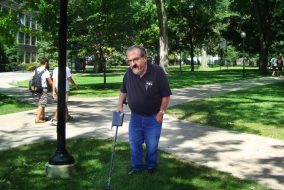