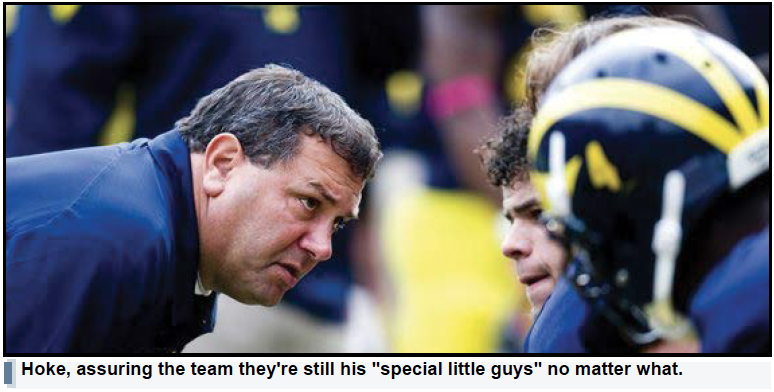 Sources report that coach Brady Hoke took time this week to sit down all 85 Michigan football players and explain his “painful” decision to “part ways” with offensive coordinator Al Borges.

“Look, I know this is difficult for you guys,” Hoke told his team. “It’s difficult for me too. But the truth is, Al and I just weren’t getting along anymore, and we could see that it was affecting you. It’s better that we split up.”

Upon hearing the announcement, the members of the team were visibly upset, with reactions ranging from sadness to anger.

“Is this my fault?” asked a misty-eyed Devin Gardner. “Did I do something wrong?”

“It’s not fair!” yelled Taylor Lewan, as he kicked a dent in a nearby locker. “Everyone else’s coaches have managed to stay together–– why can’t you just work it out?”

Despite the emotional response from his team, Hoke maintained a calm demeanor and addressed their concerns.

“I want to make this clear: this is not any team member’s fault,” said a choked-up Hoke. “Al and I have been drifting apart for some time now, and the Buffalo Wild Wings bowl was just the last straw. Don’t worry; we both still love you all very much! But Al and I decided it would be best for him to leave.”

Since the announcement, team members have reportedly been despondent, moody, and badly behaved, especially in school. Witnesses claim to have seen Fitzgerald Toussaint pushing down classmates in his SOC 111 class.

When a professor attempted to intervene, Toussaint then yelled “Who cares? School sucks! Everything sucks!” before being sent to Mary Sue Coleman’s office for punishment.

“This is a challenging time right now,” Hoke admitted. “I can’t say I’m proud of the way my team is acting, but I do understand it. When you go from seeing your offensive coordinator every day to only seeing him one weekend a month and alternating holidays, it’s bound to put some stress on you.”

Due to his team’s distress, Hoke has decided to delay telling them about the new offensive coordinator he hired, Doug Nussmeier, although certain teammates have become suspicious of their relationship.

“I see Coach spending all his time with that strange new man,” a surly Devin Funchess said. “He’s dumb and I don’t like him. He better not expect me to call him my new offensive coordinator, ’cause I won’t.” 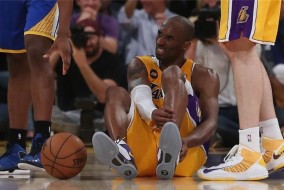 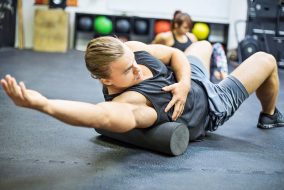