RUTHERFORD, NJ— With this year’s Super Bowl to be held outside in the MetLife Stadium in New Jersey, many fans and sports analysts are looking to the weather as a major factor in determining the outcome of the game. The forecast slated for that Sunday is a high of 37, low of 19, with a chance of snow, which experts all agree to be much colder than warmer weather.

“It’s going to be tough,” mentioned East Rutherford radio host, Jim Goodrum. “Most people like warm weather and so do professional athletes. I heard it may even drop down to around 15 degrees towards the end of the night—and that’s, like, almost 5 degrees colder than the predicted low.”

“You’re going to be able to see your breath, but don’t let it freak you out,” Goodrum added.

The NY/NJ Host Committee hopes that the bitter weather will actually encourage fans to attend the event, the first of its kind. The Committee’s logo was designed with a snowflake incorporated in the middle because it is going to be cold; and with cold, sometimes comes snow. Alfred Kelly Jr., president of the dual state organization, commented on the uniquely designed website page of SB XLVII:

“We have a full page dedicated to advising fans on what to wear to the game as their comfort and safety is our number one priority,” Kelly stated. “Jackets will be good because they are warm and so are thick pants. Also gloves. And hats. Like we say on the site, ‘Bundle up because temperatures may be lower than you anticipate!’”

“We make light of the situation when we say, ‘Wear layers because Bruno Mars’ halftime show is sure to heat up!’” Kelly mentioned. “But, be aware, it is going to be very, very cold. Potentially. And your body heat may melt the snow that has fallen on you which will cause your clothes to moisten and you will probably feel colder that way too.”

Additionally, many sports analysts predict the frigid temperatures will contribute to the outcome of the game.

“Peyton Manning passes with around 65 percent completion in games above 40 degrees,” reported ESPN analyst John Clayton. “But when the temperatures drop, so does his accuracy. If he’s playing in under 40 degrees we see a corresponding drop in passing percentage to a 63 percent completion rate.”

“That’s definitely saying something about the cold weather. Namely that Manning might play worse if the temperature falls as it’s expected to—which it might.”

Furthermore, Peyton Manning is older than his Seattle counterpart Russell Wilson. Experts agree that cold weather is often harder on older people and so this too may play a large role. 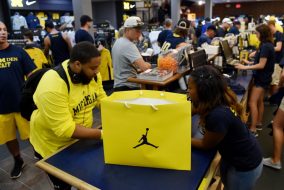