East Quad residents Melanie O’Brien and George Boyd both made their way to the cafeteria early last Sunday morning only to discover, upon sitting down, that they were the only two students currently occupying the dining hall, sitting less than thirty feet apart from each other—a space occupied by the white hot sexual tension only college freshmen can emit.

“She could have sat anywhere,” stated Boyd, “But she chose the booth five tables diagonally away from mine. It’s like, jump my bones why don’t you.”

O’Brien reported a similar reaction to their proximity, remarking, “I sat down and realized he was the only other person there. Suddenly, I couldn’t help but notice how nicely his Looney Tunes pajama pants framed his bulge.”

O’Brien then apparently toasted herself a bagel, spreading the cream cheese onto the warm bread in a slow and deliberate manner. She then ate a banana, to which Boyd commented: “She ate a banana. Like in front of me. A banana. Like, a banana. Do you get it? ‘Cause like….it’s like….she was eating a banana! It was like, wow. You’re getting what I’m saying right? I feel like you might not be. A banana….it looks like…..you know. You know. She totally ate one right in front of me. It was crazy.”

The two students continued to radiate heat from their loins for the entire fifteen minutes they shared alone in the dining hall, Boyd apparently eating his Lucky Charms sensuously, pausing every now and then to make eye contact with O’Brien while he licked his spoon.

“He walked right past me when he got up to get more apple juice and I’m like 70 percent sure he winked at me,” said O’Brien. “I was like, take a girl out to dinner first!”

While O’Brien and Boyd never actually spoke to each other and left East Quad’s dining area at separate times, both of them remarked that they will remember the fling fondly.

“I’ll never forget Looney Tunes Guy,” said O’Brien. “His messy hair and chronic acne. The way only about fifty percent of his Lucky Charms would actually make it into his mouth when he ate them. He wasn’t my usual type, but something about the lack of any other options made him irresistible.”

Boyd remarked, “Some people might feel guilty about sharing a sexual experience like that and just walking away, but what I’ve come to realize is that it’s all just part of college life.” 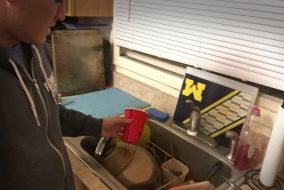