In a failed effort to achieve free tuition amidst mounting student debt, LSA sophomore Jeremy Levine shattered both his legal argument against the University and his pelvis by jumping in front of TheRide.

“Ever since I heard the rumor about getting free tuition after getting hit by a University of Michigan bus, I knew that I had to try,” Levine stated after thanking the nurse for increasing his morphine drip, “But when the bus driver stepped out, asked if I was ok, then requested to see my City of Ann Arbor Bus Pass, I knew something had gone terribly wrong.”

Due to the fact that the many of TheRide’s passengers are lower income workers who never had a chance to attend college, Levine’s injury was met with relative apathy amongst the bus’ passengers.

“I remember when I was his age, I had a crazy idea of how to pay for college too,” commented 64-year old factory worker and daily Ride passenger John Kunz, “It was called getting a job.”

Although Levine’s plan to take advantage of the tuition rumor proved fruitless, University officials confirmed that had he recklessly thrown himself in front of the correct bus, the University would have come through on its end of the bargain.

“It’s really a tragic story,” commented lame duck President Mary-Sue Coleman, “I mean, what is he, colorblind? All he had to do was make sure he was jumping in front of a blue bus, and cha-ching!”

Despite his failure, Levine says that he has not given up hope, nor has he run out of hastily conceived ideas of how to exploit the University for money. He plans to compose a wardrobe made up entirely of free t-shirts shot out of cannons at football games, steal a year’s worth of Cocoa Krispies from the dining hall, and continue to use MGuest for WiFi long after his college career is over.

“Some might call me a maverick,” Levine wrote on a dry erase board that helps ease the pain on his mangled vocal cords, “I heard The Daily is writing an article on me.”

According to medical reports, Levine also broke seven ribs along with both left clavicle and scapula, crushed three vertebrae, suffered a major concussion, and ruptured his spleen. As of press time, he is being treated in the University Hospital and will reportedly be paying a bill worth at least two 16-credit semesters. 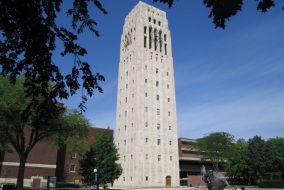 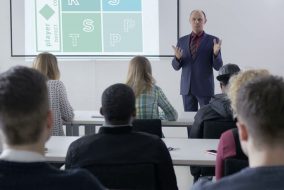