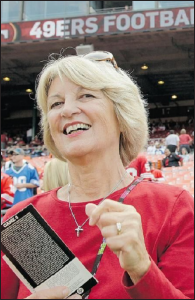 As the mother of two incredibly successful football coaches who are set to square off in the most important game of the year, I’m often asked what I’m thinking when I’m watching them play. The answer is very simple: while they are both my sons, and I care about them both deeply, Jim is by far my favorite. No question. Not even close. Every time they play each other, the only choice preoccupying me on game day is whether to wear my Frank Gore or my Colin Kaepernick jersey.

It’s not that I don’t like the Baltimore Ravens, or what John has done with them – I’m very proud. If it was only the fact the John’s win percentage is nearly 10% lower than Jimmy’s, it might be a harder decision. It just comes down to John’s habit of being an inferior human being. He’s never been quite as athletic, funny, or good-looking as my Jimmy, and to top it all off, he had to go off and marry that hag. Now, I’m not saying that Ingrid isn’t a perfectly sweet girl, but the poor thing keeps insisting on having Thanksgiving at her house, even though we all know she can’t cook worth a damn.

So when it comes to Super Bowl Sunday, I’ll certainly be proud of both of my boys. But if it just so happens that Patrick Willis comes barrelling out of bounds after a play and accidently knocks John’s head into one of those metal benches, I’ll consider myself thankful that he’s now out of the game and Jim has a leg up. To set the record straight, I would never wish misfortune or injury on either of my sons. That being said, if the 49ers’ defense decides they want to collect the bounty I placed on my dumber son’s head, that’s not exactly something I can control, is it?

Of course, we all have our opinions, and I know that a lot of people might disagree with me. For example, my husband Jack always says that John’s his favorite, but that’s only because I never told him that John isn’t his child. It’s a damn good thing the senile old man thinks his sons look so much alike.

What the FUCK? They Nominated That Hack Gregg... 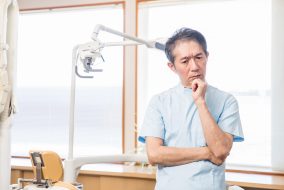 I Was Doxxed, Written Out Of The Will, And Nearly Lost My Job 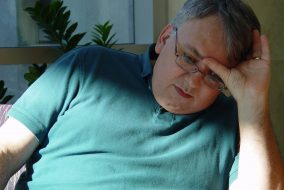