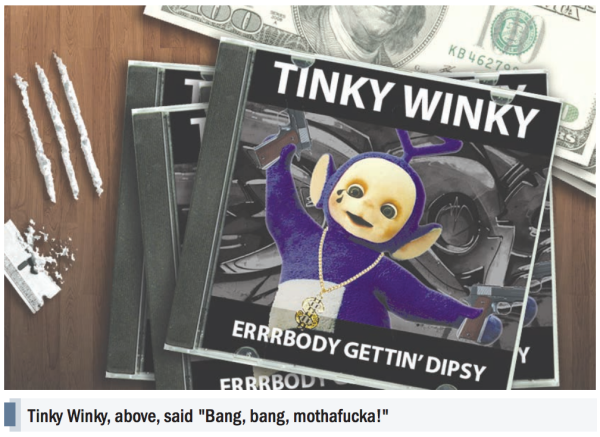 Following the release of his mixtape last week, former Teletubby Tinky Winky has been accused of expressing long-held beef with Laa-Laa in the album’s 8th track, with lyrics accusing her of being a “baby-back-bitch and always giggling over my lines.”

The song’s third verse reads, “Neva roll on a grassy knoll with deez hoes / You know Laa-Laa? More like fuck ya / For being a bitchtits-bangin’ mothafucka / Yung Money foreva,” which some music critics argue is a deliberate jab at Laa-Laa for her alleged misconduct on the set of Teletubbies. The rant comes on the heels of the group’s well-documented breakup, which occurred due to “creative diferences” over their number one single “Teletubbies say Eh-Oh!”

Tinky Winky told reporters, “Look man, I was the only one on the grind for that album. I’m talkin’ day-in, day-out work. That wake up in the morning, smoke a blunt and get rhyming grind. Shit was unreal. Then this hoe, Laa-Laa, comes along and steals my lyrics. My words. My art. My soul.”

He continued, “You really think some yellow-assed crooked antennae wearing slut could write that fucking poetry? My left nut is a better rapper than her.”

The buzz surrounding Tinky Winky’s album comes at an especially chaotic time in his career, as his “codeine cocktail” addiction recently landed him a six-month stint in rehab, and he was also arrested just two days after the group’s album released for allegedly robbing a liquor store.

Tinky Winky attributes his life of crime and drugs to the television show that originally garnered him fame. He stated, “The pressure, the hype, the limelight was unbelievable. I’ve seen things they can’t even air on HBO Late Night.”

He concluded his press conference by pouring out the contents of a 40 oz bottle of malt liquor as a tribute, saying “This is fo’ da homies who ain’t makin’ it out of Teletubby Land. Neva stop hustlin.’” 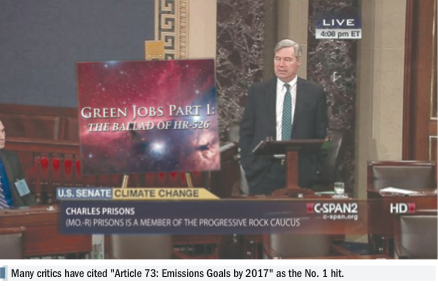 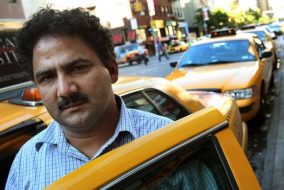 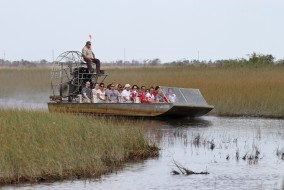 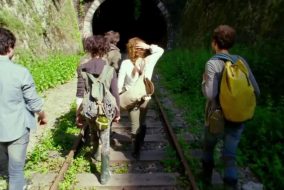